Never mind the price, it’s out of all of our leagues. But simply marvel at this Paxton Locher-designed futuristic five bedroom house in Hampstead, London NW3.

It is a quite stunning design, said to be the finest of all of Paxton Locher’s projects. Some statement, seeing as a previous build by the architectural team was described as ‘one of the great London houses of the late 20th century’. Why so great? Well, it packs a hell of a lot of ‘wow’ into a fairly restricted space.

In the heart of Hampstead Village, the house is set behind electric gates and behind a courtyard with two off-street parking spaces. Once inside, you’ll find a remarkable property covering around 6,500 sq ft and set around a 40ft ‘double-volume’ reception room. This room has two retractable glass roof lights which, when open, transform the space into an open-air courtyard. If that’s not enough, running along this is a custom-made glass swimming pool.

Wander further and you’ll find an open-plan kitchen with dining area, as well as a raised sitting/TV room. At the other end of the central space is a gymnasium. Overlooking the pool is the master bedroom, which has a dressing room and ‘his and her’s bathrooms. You’ll also find four further bedrooms, each with their own sitting rooms and kitchenettes, with access to a small patio area. In addition, there’s a guest suite on the first floor and a self-contained studio / guest annexe with its own entrance.

Just to emphasise who this is aimed at, the lower ground floor contains a ‘party and media room’, with high-level windows looking in to the pool. There is also an integrated garage with two further parking spaces, along with a sliding wall onto the front courtyard.

A stunning glimpse into the future, but a glimpse that’s available to buy right now…at a price. That price? A jaw-dropping £7,950,000.

Tags: architecture, contemporary, design, futuristic, Hampstead, home, house, london, luxury, modernist, NW3, Paxton Locher, property, sale, style
Love WowHaus? If you enjoy what you read or have benefitted from it and want to help with the growing costs of the site, you can always Buy Me A Coffee. Every penny genuinely helps.

On the market: Five bedroom Huf Haus in Oxshott, Surrey 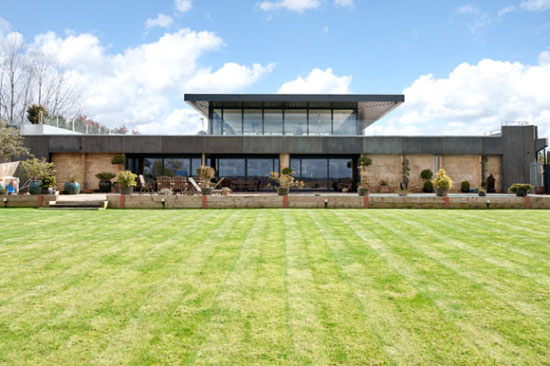