It has been updated, but this 1950s Medway midcentury modern house in Wigmore, Kent is still a very striking proposition.

Striking because the update has been mindful of the original design and features. This certainly isn’t a time capsule, but much of the character is intact, which is pretty much all I ever want to see.

Medway House (that’s the official name) is described as a midcentury modern design, which it pretty much is. A hint of modernism, a bit of traditional too. But this is a house very much of its era of the 1950s.

It was commissioned by its first occupants back in 1958 and sits on the edge of Wigmore, which is said to be a ‘quiet village’, five miles to the south of Chatham and six miles from Rochester. I don’t know the area, but it sounds like a decent spot.

It’s quite a substantial house, covering 2,205 sq. ft. in total and with potential to extend on the second floor. I can see the potential of that, but there’s something rather appealing about that loft space, with its original wallpaper. Rather like stepping back into the past. But the less sentimental will probably see a loft space at full height and covering the width and length of the house as a perfect way to add in some extra space and value.

That’s about the only place that hasn’t been renovated in this one, although as I said, original details have been kept in place to maintain the character of the house.

Of course, the frontage is one of those original selling points, with its white brick finish and timber cladding, along with the porch and large windows. The central glazing shows off what is perhaps the biggest selling point of the house, that central staircase.

Yes, an original open-tread staircase that’s pretty much the focal point of the house, also benefitting from the 1950s metal rails. Quite something.

Outside of that, check out other details, such as the herringbone-parquet floor made of solid teak, the original wardrobes, the internal doors and the original lime-washed floorboards in the bedrooms to name just a few examples.

Enter the house and you see that staircase in full effect, with the triple-height wall of glazing flooding both floors with natural light.

As for space, the ‘generous’ reception hall has access to the four principal living areas on the ground floor. To the immediate left of the entrance is a study (or fifth bedroom if you need that), with the reception also leading to the split-level dining room with bi-fold doors leading out to a private garden to the rear.

A modern kitchen leads off the dining room, with built-in appliances and a breakfast bar. The living room spans the entire length of the ground floor, with two large picture windows boosting the natural light. This room also has a log-burner, wood store and a wall of bespoke bookcases.

Head upstairs to the first floor and you will find four double bedrooms, each with those original lime-washed floorboards. The master bedroom has an en-suite shower room, with the family bathroom covering everyone else. Last, but not least is that loft space, which I mentioned earlier.

Gardens too, with the outdoor space currently laid to lawn, with mature shrubs and trees creating seclusion from neighbouring playing fields.

Tags: 1950s, 50s, architecture, classic, design, fifties, home, house, Kent, midcentury, midcentury modern, property, retro, sale, style, vintage, Wigmore
Love WowHaus? If you enjoy what you read or have benefitted from it and want to help with the growing costs of the site, you can always Buy Me A Coffee. Every penny genuinely helps. 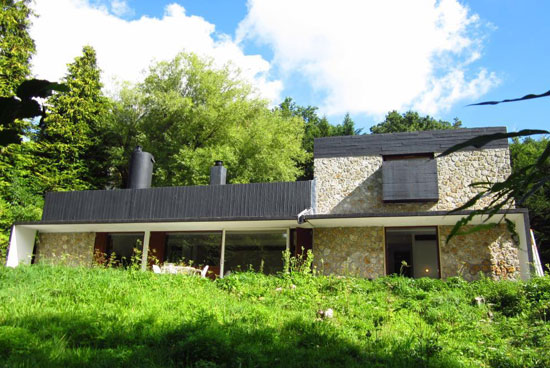 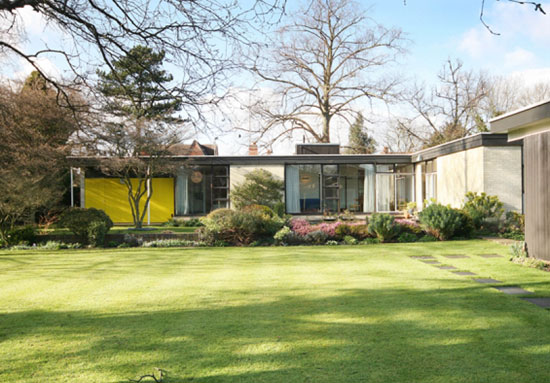 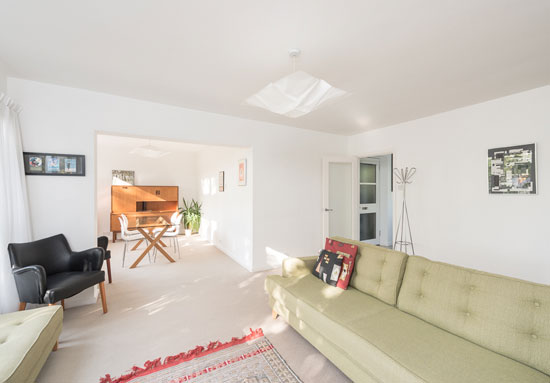