This is something special, Built in 1968, this grade II-listed Richard and Su Rogers-designed Rogers House modernist property in London SW19 is described, quite rightly, as ‘one of the most important and celebrated houses of the 20th century’.

Richard Rogers, the man behind the likes of the Pompidou Centre in Paris, Lloyds of London and Heathrow’s Terminal 5 described it as ‘the most successful small project I have been involved in’. So architecturally significant, but also well located too – it sits on a secluded and private garden plot opposite Wimbledon Common, just a short walk from the centre of Wimbledon Village.

Still owned by the family and on the market for the first time, this grade II-listed modernist gem also has its own mini building in the garden, a smaller version of the main house that was originally a pottery studio and guest space, but is currently two open-plan spaces composed around a central utility unit housing a kitchen and bathroom.

Head across a courtyard and you’ll find the main house. Constructed from steel and glass, it is designed as flexible internal space, but is currently laid out as a large open-plan kitchen / living / dining room alongside an area featuring a main bedroom, two smaller bedrooms, a bathroom and utility area. At either end of the house are ‘sheer walls’ of glass that overlook the landscaped gardens and courtyard on either side.

Dada Rogers, Richard’s mother, laid out the gardens and courtyard, which have been maintained as intended. Also, the bold colour scheme of the building is original too. That was also conceived by Dada, in collaboration with Richard and Su.

An amazing and unique property in a superb location. You’ll not be surprised to hear that the asking price is £3,200,000. There is a viewing day on 22nd June 2013 if you are genuinely interested.

Tags: 1960s, 60s, architecture, classic, design, Grade II, home, house, london, modernist, property, retro, Richard Rogers, Rogers House, sale, sixties, style, Su Rogers, SW19, vintage
Love WowHaus? If you enjoy what you read or have benefitted from it and want to help with the growing costs of the site, you can always Buy Me A Coffee. Every penny genuinely helps. 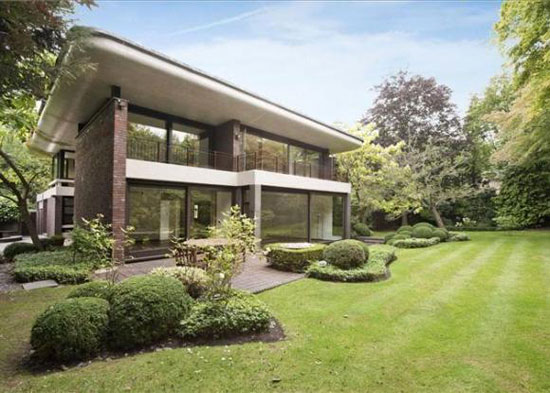